where the angel laid her finger and devil laid his thumb.... 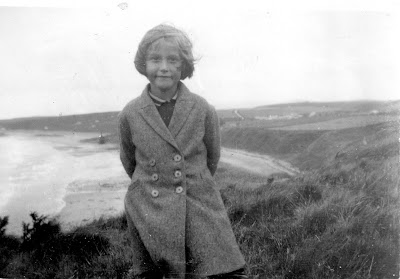 first let me say this post is not meant to rain on any one's religious parade. it is simply my experience.

i remember going to church from a very early age. i can recall everything through eyes that spent about 45 minutes every sunday studying their surroundings. the smells and sounds are still with me. our minister was a quiet man who lead his flock in a voice free of fire and brimstone. his sermons would wash over his parishioners like a warm wave. i think my people came to church to rest. their week of labour over, they relaxed into the steady hum of praise for our god. there were no stars in our choir nor they did not sway to music. there was no band, just my aunt on the organ. our services were not interactive - there were no amens or praise the lord shout-outs. communion was truly a communal affair with little nuggets of bread and tiny glasses of grape juice that were always received sparingly so the leftovers would keep children quiet for the rest of the sermon. through this instruction i learned about god. he was very nice man who loved children. he had a place for you to go after you died. the description was a bit vague but we would be walking around on clouds. there really was no big interview process for getting into heaven. do your best and try to love everyone. the most important thing i learned was that god was love. it was that simple. the potential to follow these simple guidelines were in us all. there was never any mention of not succeeding. this love we possessed was a part of us like our eyes and legs and almost impossible not to use. it was a very good feeling and i took it to heart.

somewhere along the way this message became a bit boring for some people. a new church opened to complete for the souls of our community. it was flashy, raucous religious theater. i was introduced to new players in faith scene. in a lead roll was this devil guy, who lived somewhere in the middle of the earth. he was a mean bastard, with a tail and pitchfork. also there was a new god and he was fairly angry. there was some sort of war going on between the two of them and we were the prize. i must tell you it was all very exciting but it had nothing to do with me. i had my spiritual instructions and they definitely did not include any of this foolishness. so honestly, it was entertainment to me. i sat enraptured not with the message but the players. there was crying and shout outs. there was talking in tongues and moaning. people raising their hands and going forward to confess some very interesting sins. at times i had to sit on my hands to keep from clapping.

when the new church came it caused a division in our extended family. some family members preferred the big show to quaker-like silence in our church. there was great pressure to convert. the old guard stood firm." we are an anchor that cannot move, steadfast and sure while the billows roll". those words are from my favorite hymn and they remind me of that time. a great wave of religious revival was washing over us but most of us remained firm.

deliverance through fear is a very powerful concept. killer bees and army ants on their way, the end of the world, the fiery pits of devil's hell, and it unfolded that this new vengeful god had a fair number of conditions about entrance to heaven. there were in fact a set of gates on the place, pearly, but nonetheless gates. i understood they kept the undesirables out but maybe they kept people from leaving. and to top it off this god did not accept everyone. non-believers, homosexuals, jews, muslins the list was long and impressive. this heaven i thought must me quite roomy - an exclusive destination that specialized in exclusion.

this all became personal to me when my dad died. my father was a lovely, kind man who worked tirelessly for his community. he had the power to lift people up and make them believe that their voice was important. but he was also a bit of a hell raiser - he was a chain-smoking, liquor drinking, potty-mouth man with no alliance to any god. i am sad to say i have very few memories of him. he died when i was 6. i knew he loved me and i him. people told me wonderful stories of his good and bad deeds. after some time had passed my uncle took me aside one day after sunday school. (by this time the sunday school in our church had closed so we converged on new comers). my dear uncle whom i loved told me my father was in hell spending eternity burning alive. he told me my mother was headed that way as well because she would not convert. my father could not be saved but i could save my mother if i accepted jesus. this was all quite distressing. how in the hell did that happen. my father had been caught in the crossfire of this parallel religion. i had never even imagined that this could happen. of course i cried and then did what came naturally, i told everyone i knew this news. views were mixed but the general consensus seemed to debunk this theory. well, that was reassuring. this troubling theory stayed with me though, a nagging little problem in the back of my brain. i went over various plans of rescuing my father but mostly i wanted to make hell a bit more hospitable. i wanted an audience with this devil guy. if this new god was capable of vengeance and judgement then i reasoned this devil could not be all bad. i would explain to him that there were apparently quite a few of us coming his way and perhaps we could talk this out. no more fire, maybe a tv and ice water to drink. through it all i knew for certain i wanted nothing to do with this new god fellow. denying my father entrance through the gates was enough to get my ass up. i thought that maybe when i got through overhauling hell i could possibly agree to take on heaven.

as i grew up i was reminded often how sinful i was for not accepting jesus christ as my personal savior. that sounds silly now as i write it . personal saviour. its a bit like personal trainer or personal assistant or personal banker. but apparently back then personal attention was a new concept. i went through a period when i would cringe when hearing the world jesus used in any context other than cursing. i was only happy to judge my judges'. i finally realized that somewhere in this must be the lesson i am here to learn. i sometimes feel like a roman soldier and his lion that have been ordered to job retraining. i understand that when you lead with love the rest will fall away. but trying to love the enemy is a very hard pill to swallow.

i must admit that i have yet to fully make peace with the past. in many ways i am still that little girl quite willing to face the fires of hells, rather than take a peek behind the pearly gates. they do say "better the devil you know, than the angel you don't" i know for certain there is far more love in me than disdain or hate. my nana used to say that hate was just fear in really bright clothes. fear can makes enemies of the nicest people. i have never thought as god as a real person or heaven as a real place. i don't know if that makes me a heretic and i have ceased to care. i learned long ago that god was love with no strings attached. i may be far from a model citizen but i do find myself filled with love for almost every person i encounter from cashiers to babies. i feel a sense of tender responsibly for them all. we are all together on this planet. what will be will be, but for now, all we have is each other.