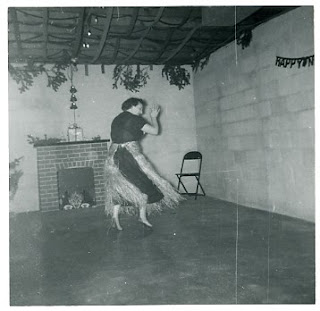 the shop has been in a very odd place this week. i'm not complaining - that would be sinful. but still, it's like my little retail wonderland has been the shooting location for a made for tv movie. a very low budget tv movie. everything has had a very dream-like quality. normally trusty crafting customers have collectively veered off the path of preordained interaction - or they're huffing solvents between their car and my shop door. people are asking for things that to my knowledge don't exist. maybe it's me. maybe they're speaking in code that i'm not hip enough to get. there can't be porn paper - can there. i have never thought of the possibility until now. do you suppose there is an underground dirty paper market. should we google it - perhaps not.

i've had people showing up at all hours. which is sort of ok. i'm not one to turn down a few quid. but let's face it i'm barely at my best during shop hours. my meds don't stand a chance in the delicate hours before 11am. cars have just randomly been showing up which suggests to me that it might not be random (movie tie-in). my kid shouts "car at the shop" and i fly out of bed. "its 9:30am on sunday" i think. i fly to the shop bleary eyed, braless and my hair flattened against my head. ta-da

i had a cranky customer on wednesday. i've only ever had 2 and quite frankly she had nothing on the first one. but still, she was stunning in her own right. she told me, right up front, she usually shopped at the dollarama and i just jacked up prices for the same thing. i've got to admit she threw it down. but its hard to have a cockfight in such a small space. i tried winning her over with gems from my extensive charm repository; but she was impervious. she was just a chippy girl accustomed to inferior adhesive. ultimately, she was seduced by fab product and my low-ball pricing. she bought some stuff, double-checked the receipt, bitched about the final price and left in a closing volley of praise for her beloved dollarama. i wished her well but i feel she won't be back. i'll miss her. the girl had game

the next day a car drove up and woman emerged that i instantly recognized as dollarama girl - the remix. i've seen her look before, the - you missy are quite the disappointment - look. i felt i should take immediate preemptive action. negative energy warps my paper. "jesus, you look pretty," i cooed, "that colour looks wicked on you." well, we just turned that frown upside down. after that she and i got on like gangsters, turns out she was just having a bad month. i sold her some stuff, gave her sound advice and a complimentary reusable kraft bag.

so you see kids, all turned out well. love won out in the end. it took patience and a little verbal magic but we emerged from the week unscathed and a wee bit wealthier. i'm confident that next week the world will have righted itself and everyone will be back to their joyfilled selves and the movie will have wrapped

here at long last are some pics of the recipe mini. feel free to criticize - i can probably take it. 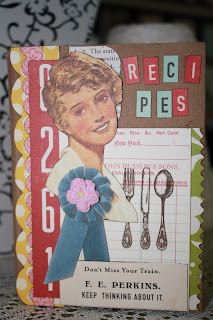 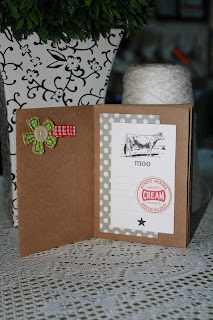 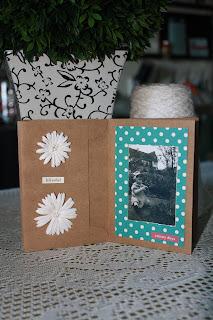 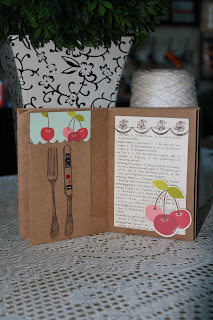 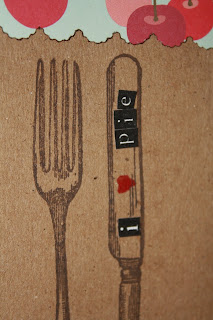 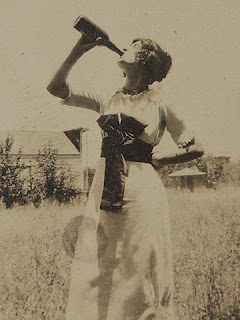 brace yourself evie. its another non-crafting post. honestly, if you people are waiting for tutorials or industry news, i'm probably not your girl. i am most likely what is referred to as "a crafting one-night stand" i take part of that back - the public keeps distracting me with their goofy antics and my pre-menopausal hormones are wrecking havoc with my already fragile attention span. so do you want to hear about the farmer's market and rodeo.... or would you like to hear my thoughts on CHA and aversion to copic markers. one involves nudity and the police. just as i thought..off we go

the farmer's market has been slightly uneventful. sure there's the infighting surrounding table issues. location - location. in case you're not in the know - the place you want to be is against the wall and near the front. and nowhere near the tupperware chick. you absolutely do not want to be in the centre isle. back to back tables. i imagine it to be like general population in prison. except old craft ladies have no tats but they do have lots of gas. i don't mind spreading myself around but i don't do general population - well i might do it intoxicated. you should know this is not the part with the interesting ending. well every saturday involves a bit of trash talking by the ladies. opera whispering about what delores did to get table 3. it sounds boring but if you've got a dp in your hand - it's a teenie bit like dinner and a show.

the whole thing got a bit ramped up during rodeo weekend. we're all supposed to be on our best behavior - personally that translated to my being on time and no dirty talk. sooo we were encouraged to dress the part - you know western wear or period costume (cowboy or hooker). i was given a purple dress to don but i protested "i want to be a cowboy" i whined "i'm ALWAYS the hooker". god, i was pathetic. in the end i got my ass up and wouldn't wear the fetching frock. i went modern day, gender neutral- something for everyone look.

the rodeo parade (that started from the community hall) was your basic 3 float/100 horse variety. the "spotlight" float was entitled - old queens. you know, i can't add anything to that. it's it own little fill in the blank joke. well off the cavalcade went in a blaze of square dance music and intermittent rain. somewhere, eye witness accounts vary, the whole moving spectacle came to unceremonious halt- the pomp police officer leading the procession had to leap from his cruiser to break up a fist fight. the chaos ensued - horse shit everywhere, old queens flailing their scepters. i'm sure we won't make the brochure for small town living. the fight between 2 middle age men was over a parking spot.

trouble took a risque turn later at the local hotel. think towels on the table to soak up the spilled ale kind of hotel. a lady disrobed while riding the mechanical bull. i wasn't there, i can't say how much she had on to begin with. this much from a town of less than 600 people. imagine what we could do with more players.

so you see, my capacity for mature, creative endeavors has been reduced by all this foolishness. 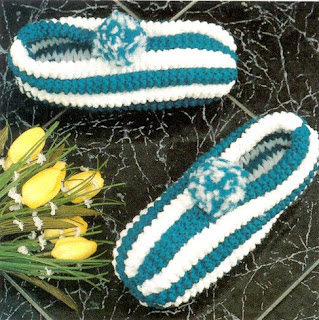 I am seduced by the normal - you think I jest? I am intoxicated by normal - hockey moms, blond highlights, ice tea, facebook, acronyms like LOL. it's all a sparkily twirling light show. i watch in amazement as people maneuver through this maze - everyone knowing which behavior, emotion and facial expression goes where. normal people also recognize their kind. you never feel awkward in a crowd. never without your magnetic north. sometimes i get close - let's say a conversation about cleaning windows with newsprint - then i brick up and ask if any words from the newsprint ever randomly get transferred to the glass and how cool that would be. at this point the light goes on for most people, they tilt their head, look at me with a strange mix of pity and annoyance, sigh and move on. At the farmer's market on saturday i was positioned across the aisle from an impressive display of normal. tight perm kind of normal - she was so sweet, i could have wept. it was pretty much love at first sight for me. not track lighting, vest wearing kind of love. the other kind. i spent the better part of the 3 hour tour trying not to scare the bejesus out of her. she spent the entire show crocheting a shopping bag out of beige phentex yarn. and the look on her face - mother mary could not have looked more serene. hopefully she and i will become confidants before the end of the summer - i bet she doesn't even own a freak flag.

i am partaking in two activities right now that pretty much put my mean age at 12. i can't confess, i'm not strong enough

and and i will be posting an interview soon. real or imagined people want to talk to me

yes, it has come to that. i seem to be in a bit of a crafting funk. it's time to take one for the team. bury my face in the pillow and do it for my resume. i'm certain you've heard them all. it has occurred to me that i may simply have nothing left to make. i haul it all out and look expectantly at the paper. where are you, you little project? maybe i suck or maybe i'm lazy. maybe i'm all dried up - a withered old paper whore. that was a bit harsh. bear with me, i can sometimes be a prayer challenge. so, at sometime today, i must do the deed - brace myself and remember the empire. I have more but I won't use them. I am known locally as THE model of restraint. 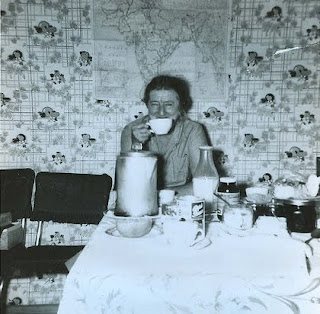